“Upon reflection, nobody is as crazy as Miuccia Prada to think of this pairing, asking a Chinese artist to photograph a Chinese 'idol'. I was excited for many days afterwards I received the proposal, not only because of Cai Xu Kun, but about the project itself, to have this opportunity to plumb these cultural depths, using a real-life 'idol' to communicate with the tens of millions of followers behind him. As an artist, you cannot ignore those who stand behind him. How should I represent somebody else's idol?”

"I was once a fangirl. Edward Furlong, Aaron Kwok, Michael Jackson, Madonna, Prince, Bobby Brown, Kris Kross were all on my idol list during my youth. Eventually in my adult life, the concept of an “idol” faded away and I moved towards areas of interest – art and culture. However, with my children growing up, I started to cast my eyes again on the idols who are getting younger and so do their following.

I was asked by Miuccia Prada to develop a campaign starring Cai Xu Kun, who rapidly ascended to become the newest “celebrity super-influencer” in the past year, dominating trending topics on social media, appearing in all our internet feeds.

Starting with the notion of aidoru—a Japanese phenomenon, borrowed from the English word “Idol,” that has spread a unique form of idol culture around the world— and together with my observation (which should thank to the experience as “a fan” myself) on today's “idol culture” which in this age is built upon a symbiotic relationship between celebrities and their fans, I conceived the concept of Code Human. If viewed from an anthropological and sociological perspective, then in this work, I placed Kun, who is a cultural phenomenon, into a futuristic archaeological environment in the “Post-Anthropocene” era, where a perfect man-made KUN lies like a specimen on show in cabinet for visitors to see. In the film, Kun also played a visitor to this “Museum of Mankind”, in the exhibition, he suddenly sees a specimen that looks exactly like himself. Who is imitating who? In the future, this is the ethical questions facing the idea of man-made men. Like clones, it will result in a conflict between the species.

Cai Xu Kun, has already become a symbol of this era of influence, whether it's the messages of love or criticism from different groups or the chain reaction he causes on the internet. On set, Kunkun (the nickname I gave him on set) would call me “Master Cao” (note: a term of respect given to Chinese elders or teachers), he was very nice, professional, tall and very thin. He said the set design for the film gave him a lot of inspiration. He had a warm demeanour, but you can tell in his heart, there resides a rebellious person.

It's impossible to imagine how powerful he is, he commands a stage and wields the power of the internet. I hope he goes far on his road to success." 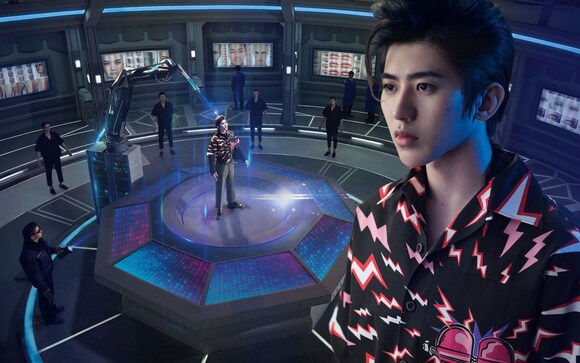 'Code Human' is part of a long-standing programme of innovative, cross-media Prada campaigns and projects spanning the fields of design, architecture, cinema and art. Prada continues to collaborate with leading practitioners across all these creative spheres, exploring the intriguing intersection of different cultural disciplines and experiences.